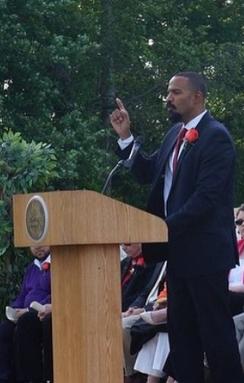 Socratic Inc.'s lead Keynote Speaker and founder Attorney Socrates De La Cruz received his Bachelors Degree from the College of the Holy Cross in May of 1995 and earned his Juris Doctor from Suffolk University Law School in 1998.

He has worked as an Assistant District Attorney in Essex County, Massachusetts and as an associate at a Boston criminal defense firm. In 2000 he founded the The DLC Law Group, P.C. which specializes in criminal law, personal injury and real estate matters.

Attorney De La Cruz has received many honors and awards, including the Boys and Girls Club National Youth of the Year Award, which was presented to Attorney De La Cruz at the White House by President George Bush in 1991. He has been featured on the Oprah Winfrey Show where he was honored with the Oprah's Angel Award for his service to the community and featured in Denzel Washington's New York Times best-selling book, A Hand to Guide Me, In 2001 he was inducted into the Lawrence, Massachusetts Boys and Girls Club Hall of Fame. He has also been featured in a National United Way television documentary.

Attorney De La Cruz is committed to serving his community and being a voice for those who are marginalized. He is a member of the Board of Trustees for the Lawrence, Massachusetts Boys and Girls Club and a member of the Executive Committee of the Greater Lawrence Bar Association. He has served as a Trustee at Holy Family Hospital in Methuen, Massachusetts and as a member of the New England Conference Free Methodist Church Board of Administrators.